After reading Letting Go by Dr. David R. Hawkins, I had to delve deeper into his teachings. He’s an amazing thinker, philosopher, theologist and totally in touch with the psychological evolution of humankind on a metaphysical level. Did I lose you yet? I hope not! It sounds deep, but it’s really cool. You can use it to be happier, more satisfied in your relationships, and even advance your career. This stuff is kind of esoteric, but let me explain…

Have you heard the phrase “raise your vibrations”? It’s been around since hippie times. Good vibes. Right on. Ya know? Hawkins’ general teachings assign “vibratory levels” to certain emotions. Shame, guilt and anger being at the lowest end, love, peace and joy at the highest. He’s calibrated the levels of all emotions; a sort of ladder of consciousness, on which we can measure our own evolution. He’s far from being a hippie, though. He’s done research into kinesiology that supports his stance that the higher energy levels strengthen us, the lower energies weaken us.

The idea is that in terms of kinesiology, your body knows the truth. Certain thoughts, emotions, images, music, can make you go either “strong” or “weak”. When you are filled with love and joy, your body is strong. When you feel grief-stricken, at odd with someone, it goes weak. Basically, your body will become strong in the presence of truth and authenticity, it will go weak in the presence of falsehood. it’s reflected in the musculature of the body. You can even test it.

Here’s an overview of his chart and energy calibrations: 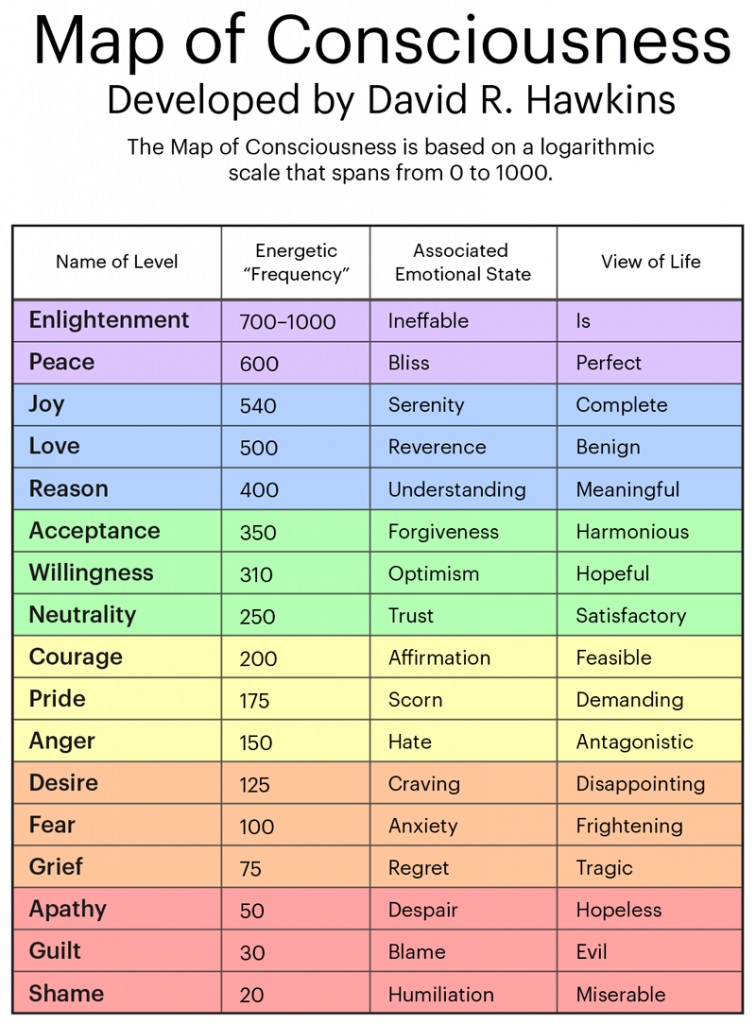 On a personal level, the idea is to “let go” of those lower energies to ‘vibrate higher’ and attract abundance, happiness and fulfillment. On a societal level, the idea is that when we raise our vibrations we move forward the collective consciousness. This makes logical sense to me. The more we can release negativity, the better we feel. The more authenticity, love and truth we can project towards ourselves and others, the stronger we become. And the more people doing that, the better our families, communities and world will be.

After reading Power vs. Force, my tally for 2019 is seven books read, as well as two Audible audiobooks completed.  More on my 52 Books in 52 Weeks project