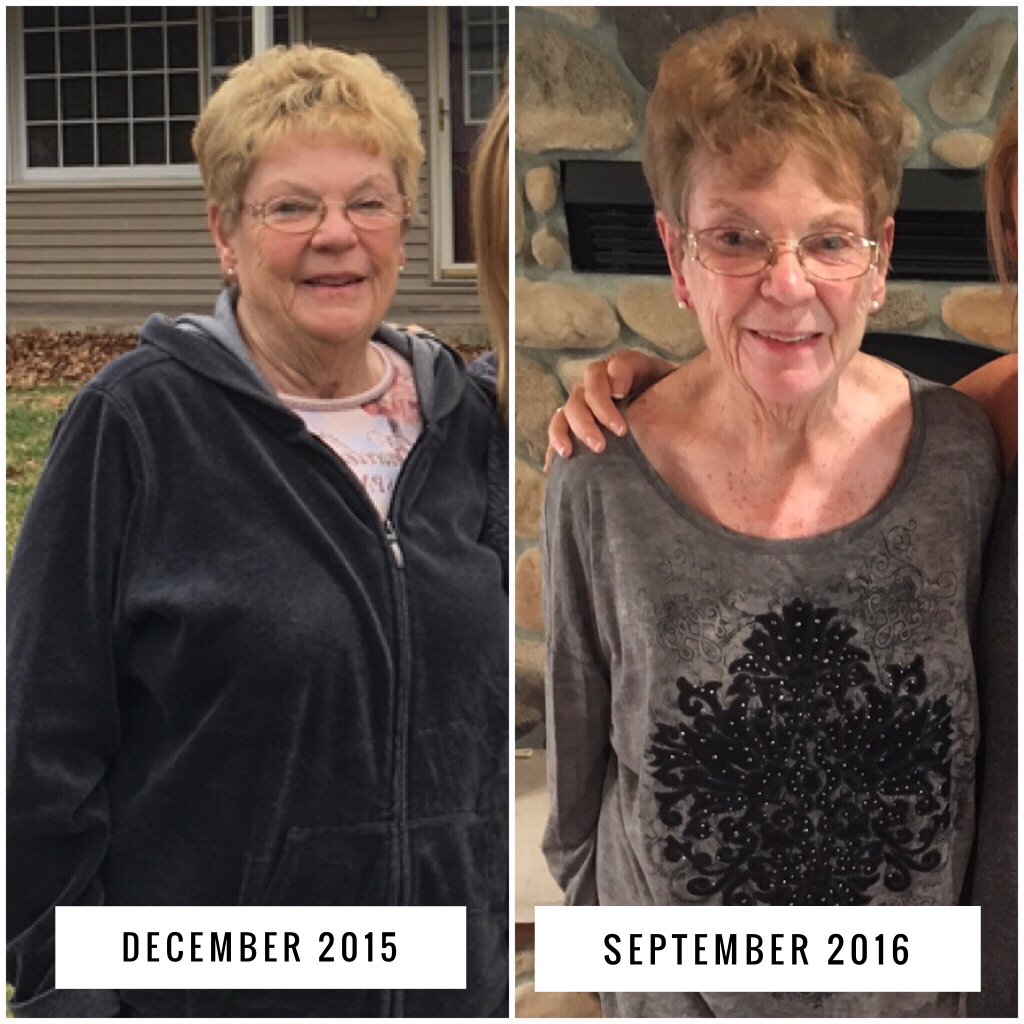 Some stories begin with a tragic event.  I don’t think my mom’s story would have happened without this one.  You see, my dad passed away somewhat suddenly last fall.  He had been diagnosed with cancer in August, and although his prognosis was good, his body wasn’t strong enough to undergo the treatment.  He passed away on October 19th.  It was the day after my daughter’s sixteenth birthday, just a day after I ran my first half marathon.  Our family would never be the same.

Mom decided to make a change on December 1st, 2015.  She always wanted to lose weight, but it had been a struggle when Dad wanted those typical Midwestern meat-and-potatoes meals that men raised on a farm typically enjoy.  Once my mom had freedom to cook for herself, choose clean meals, more veggies and salads, lean protein like fish and chicken and her weight started to come off.  She also eliminated bread and dessert.  She made Shakeology her morning staple.   Within the first couple weeks, she noticed that she didn’t have cravings, she felt better and was motivated to eat better.  When I suggested she add spinach to her shakes, I don’t think she believed she wouldn’t taste it.  She says, “I HATED spinach!  Now, I add it to my shakes (along with fruit) every morning.  I know that whatever happens the rest of the day, I’ve had a good start.”

Her goal was to lose 50 pounds, but she wanted to do it slowly and sensibly – which is exactly what she’s done.  She still enjoys happy hour (our mother-daughter bonding time) and nine months later, she is very close to her goal, having lost 35 pounds since last December. She has gone from a size 18 to a size 12 (which I think looks big on her). She had her knee replaced this summer, which derailed her progress slightly -but soon she will be ready to add exercise back into her routine. She’s looking forward to hitting up LA Fitness for Silver Sneakers classes and Water Aerobics in her condo community once back in Florida.  It won’t be long until those last 15 pounds are history.

My mom’s story proves that when life throws you a curve ball, it’s up to you to make the most of it.  Through all the bad stuff that’s been thrown at her in the past year, she has a lot to be happy about.  At 73, she wants people to know you’re never too old to make a change.